A ceiling hosted light fixture can cut the host ceiling. When an architect uses one of these fixtures the ceiling surface the Revit MEP user has to work with actually has a "hole" in it. This means that they can't put their own light fixture in the same spot because there is no ceiling there. 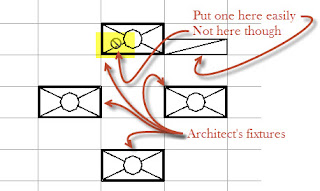 Technically that's an oversimplification. We CAN put a fixture in the same location but there isn't a face for Revit to detect easily. If you try to use the Downlight - Recessed Can family it's origin is too far from a ceiling's grid pattern to let us put it within a tile. We can put it in randomly and then move it to the correct location. We'll get yelled at though, the light isn't properly hosted now.

If we do the same sort of thing with the troffer family (2x4 fixture) it will be a bit more tolerant as well as not losing its face association.

This sort of discipline collaboration isn't tons of fun.