Following on yesterday's post regarding Doors and Openings, Daniel Stine wrote to mention that the opening families that we used to find in the door folder along with other doors are now in a new folder called Openings. 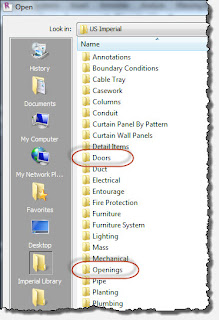 The opening families are still assigned to the category Generic Model. That was done purposely so they don't show up in door or window category schedules. It is fairly common practice here in the USA anyway to exclude them. This was more appropriate in the past before the introduction of Filters. Perhaps it would be better if these openings were part of the category that fit their behavior now. We could use filters to exclude them just as easily with more graphic control as well.

The "new" version of Revit called...Revit (secret code name "One Box", not so secret now though?) has created some new conditions for content. First you'll find some folders that include sub-folders for Architectural versus MEP.

Revit MEP users are used to all the electrical content being located under a single folder and then broken down by usage. Now we'll find Electrical and Lighting and these are further broken down by Architectural and MEP. Just when you thought you knew where stuff is..."Who Moved my Cheese?" 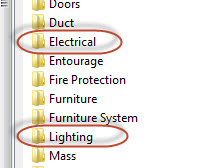 As for other subtle library changes we will now find some categories separated by Internal and External, interesting language choice versus Interior and Exterior.

Perhaps these new terms have better equivalent translations in other languages?

Just a few things to look forward to!
Posted by Steve at 4:07 PM