A bit belated, meant to write something but didn't. Revit's 10th anniversary of joining Autodesk was on April 1st. There were several mentions of it on Twitter and in other blog posts. The 12th anniversary of Revit as a product is this year and the 15th anniversary of it getting started from scratch is in October this year.

Too cool not to echo, the Inside the Factory blog shared a great photo of the people who both started working with Revit before joining Autodesk and are still part of the product team! I imagine it can be hard to get them all in the same room at times. Congrats on another birthday and may there be many more, for both software and the people involved! 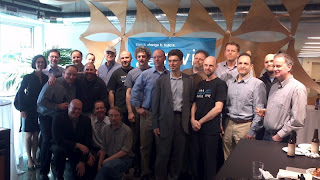 Some faces there I haven't seen in a loooong time.

Do we know if that's the whole programming staff for Revit?

If so, it's quite obvious why they cannot effectively respond to the AUGI wishlists, or the user wishes on their own site - they are woefully undermanned.

Maybe when they increase their progrmaming talent by an order of magnitude, we will see real strides in revit functionality.

No it is not all the people that work on Revit, not by a long shot. Just those who started with RTC before Autodesk bought it and who remain working on Revit still.

There are few people missing, 4 I can name off the top of my head. Some I have not seen in years were there and one I just meet for the first time at the party.

There are at least 15 more who were either out or who work in other locations. We are only a small fraction of the many people working on Revit.