This message appears when you import a DWG file that has geometry that makes the total extents of the file larger than 20 (33 km)miles horizontally or vertically. 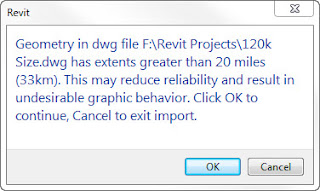 That message is different from this message.

The second message occurs when all the geometry in the file is farther away from the origin than Revit wants it to be, but the extent of geometry is not large enough to trigger the first warning. What that magical distance or number is, who knows. I've spent quite a bit of time trying to pin that down. The closest I've come is that when I have some geometry that is between 43,500 and 50,000 feet away from the origin of the DWG file Revit will complain. The problem with pinning it down is that as soon as I think I've got it, I change it a little and then Revit doesn't complain about importing the file. Suffice it to say that if all the geometry is pretty far away from the origin, there is a pretty good chance that you'll see that message. It isn't as far away as the first error message though (20 miles), it's more like 8ish miles.

If a file is too large to import when you've selected the correct units you can technically circumvent it by importing with different units. For example if Inches are too big, try Feet. The file will like import. Then you can reset the Units of the file and reset the scale value to 1. The file will be the correct size again. It won't prevent the graphical issues that really large DWG import can cause though. Your mileage may vary.

Another technique that has worked is to link the big file into another file as an Attached overlay. Then import the file that hosts the big one. Revit doesn't look at the Xref and doesn't complain.
Posted by Steve at 8:00 AM

We have noticed the second message when the geometry is still fairly close to the origin but lines are drawn with angles to many decimal places.

The second message also shows up when you import a DWG on a level where you cannot directly see it or when crop view/scope box is on.
I never had any problems importing DWG since I found this.

Or avoid this problem by simply selecting all you require and paste into a clean new dwg.