Revit is a bit obstinate about applying dimensions at times, like placing dimensions between concentric arcs for example. It's not uncommon to find people adding short Detail Lines and placing dimensions on those instead...to get the look they want. Chris Needham shared a technique at RevitForum earlier today that's elegantly simple...but perhaps not well known either.

Add a Reference Plane that begins at the center of one of the arcs and crosses all of them. You can adjust its extents afterward so it only appears near to the arcs. 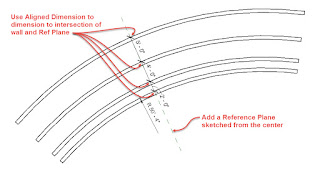 You'll find you can use the Aligned Dimension tool to reference each intersection of the arc (walls in the image) and the Reference Plane, like in the previous image. Revit doesn't give really convincing feedback on screen so you have to look closely and trust its working.

When it comes time to print, just use the Print Setup Option Hide Ref/Work Planes. If you're careful it will look like the dimensions are referencing the arcs.

It would be nicer if we could just do this directly instead...but until that day...

Oh, DON'T turn off Reference Planes using Visibility/Graphics in the view. That will also kill the dimensions.

Mr. Anonymous wrote a comment describing how using the witness line grip after placing the dimensions will allow us to associate the dimension with the arcs. Good tip too, so I created a short video describing the process. Ignore the extra dimension segment I created by mistake (I deleted it in the video).

you can also place a detail line from one arc to the perpendicular of the next. break the line so it is only a segment between the 2 arcs. dimension this line then using the witness line tool pick the 2 curves. once this is done delete your detail line.

Cool...assuming I've got something that is already perpendicular to them.