While I seem to be in whine mode this week I might as well suggest that the long standing grids generator extension get full Revit status. I think it could live on the ribbon alongside the Levels and Grids tool on the Datum panel. It might actually get used more if it were part of application and where's the harm in that?? 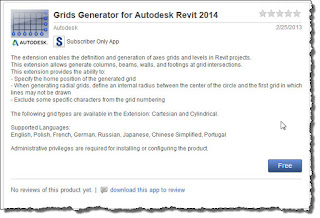 Again, like the Space Naming Utility, awareness is the issue. People just don't know it exists. Instead of "hiding" it away on Autodesk Exchange put it in Revit! By the time they find out about it they've already put their grids in. If it was on the ribbon poking you in the eye when you look for grids and levels to begin with you might be more inclined to remember to use it. Hey, I thought the ribbon was better for discovering tools than the old fuddy duddy menu and toolbars approach? :)