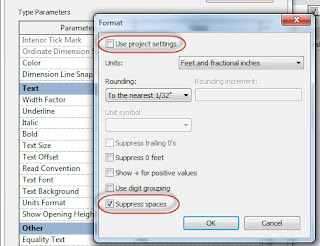 This is the new location for the option, found in the Type Properties for a dimension style. 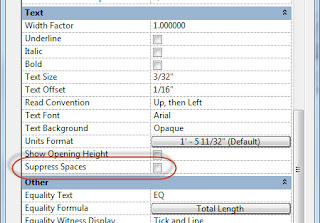 This means your dimension styles can continue to depend on the Project Units as well as suppress the spaces in dimension values. A subtle but more logical approach I think.

However in testing it appears to be broken... The option for Suppress Spaces exists in the the Project Units dialog. If I turn on the feature it affects dimension styles downstream and the option in the dimension style should then work as an option to remove it but it doesn't do anything. Odd...
Posted by Steve at 11:57 AM

The Project Unit setting for Suppress Spaces should affect the dimension value portion of the dimension string [suppresses spaces around feet and fractional inches for length and slope units]. The Dimension Type Properties > Text Suppress Spaces should remove any spaces specifically in the Prefix and Suffix Text of the dimension string. So ideally you should be able to control the dimension value [via Project Units > Length] and additionally tweak the Prefix \ Suffix Text setting under the Dimension Type. Does this match the behavior you have seen or does it still vary?

Ryan this went from working as "we" intended it in 2012 to something strange in 2013. The point of suppressing was to shrink the space that the dimension text was taking up because Revit put so much extra space in them. Now in 2013 the notion of suppressing the space has taken an odd turn, to suppressing space that should be there between prefix/value/suffix. rolling my eyes :)