I wrote a response to a thread at AUGI a long time ago that discussed using a pen tablet instead of a mouse with Revit. I was using the Wacom Graphire then. I wrote a post here called The Mighty Pen after the post at AUGI.

I stopped using it when I started traveling a lot. It was just another thing to pack and I gave into the smaller simpler mouse. I pulled it out every now and then but the last time I realized our new puppy had managed to sink her teeth into the cord in such away that I couldn't repair it. I tried with solder and iron in hand but gave up.

Last week I was contacted by Mike at Wacom about my experience with their products and Monday I responded to the door bell to find a couple boxes with the Wacom name on them. The smaller one contained their intous 4 Pen Tablet. I'm not going to get into what the larger box contain in this post, doing so would break my Five minute rule.

The packaging is first rate, very polished looking and everything very neatly presented as you opened it up. It only took a few minutes to get up and running. The tablet software took the longest to install but even that was only a couple minutes. I received the smallest version because I mentioned that arm travel can be a bit of a problem while using Revit. The conventional wisdom that I've acquired and heard from others is that smaller is better for Revit work and the larger sizes are better for graphic artists. It still comes down to personal preference I suppose.

The Graphire that I had didn't have scrolling functions or any extra buttons. The intous carries a scroll wheel (think iPod) and a center button as well as six extra buttons, three above and below the wheel. I quite like the wheel for scrolling web pages and documents. I still haven't gotten used to using them for SHIFT, ALT, CTRL but its only been a couple days now. It comes with a mouse too but I've only used it for a couple of seconds here and there. I've stuck to the pen.

In my previous post I mentioned poor posture and arm discomfort. Since I went through that before I've been better about it from the start. I hold the pen so that my thumb can trigger the toggle button for Right Click and Double Click. I settled on that arrangement before too so I didn't have to struggle with it either. The pen is much more substantial than the one I had before. I was always worried about breaking the Graphire's pen. This one doesn't worry me at all.

I picked the right side orientation, it supports either orientation. Here's how it's playing with my other stuff right now.

This next image is a long one, I'm sorry about the scrolling! It's the menu that shows what each button is programmed to do. The top button turns it on. 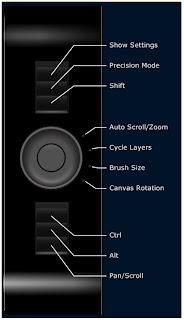 If you can't tell, I'm enjoying getting to use a pen again! After I've been at it a bit longer I'll follow up with some additional thoughts. That other box is for another post *-)

[Full disclosure: I may get to keep the intous. They made no requirement for posting or otherwise was imposed on me but I wanted to be able to try them out and post reviews.]
Posted by Steve at 9:03 PM

I'm using an Intuos 4 too, almost a year now, and can tell it's an amazing tool...
you can customize your pen (I actually use the buttons for right click and middle click), so it feels so natural using it. Great for Revit, but great for Sketchbook Pro to!
It feels great drawing again, instead of using a mouse..
And, yes, I recommend you to customize your tablet buttons for SHIFT, CTRL, ESC, TAB, ZZ, ZW,ZP WT... (I have the medium size, with 8 buttons)

I just received an Intuos Pro Pen Tablet,everything is customizable, Ill tell you know, set keys for RETURN and ESC and you're set. So far so good!

Hello, I'm thinking of switching from a mouse to an Intous5 tablet... The main programs I use are 3dsMAX and Revit. Is it worth it ? Please give me some advice...or at least give me some opinions regarding working in Revit with a pen tablet. Thank you !

After reading my post would you be surprised if I told you not to do it? Probably since I wrote the post about being happy I did. :)

So go for it, if you can afford it AND if you are willing to give it some time to adjust before you give up. If you don't you might not find out if you really like it or not.

It isn't for everyone but for those it is for...it is REALLY FOR them! :)

Hey, Have you experienced problems en trying to expand the family pulldown menu when creating a component?

When clicking with the tablet's pen it just doesnt do it. I have to press the Down keyboard key everytime and it works perfectly with the mouse.

The issue is constant do you have any adea what could be?

Yes I've seen quirkiness with pull down menus like the Type Selector. Mine stopped working recently so I haven't been using it since Revit 2015 came out.

I am new with the intuos pen. Touching the tablet with the pen point immediately gives a single left mouse click. So I can't hover over and highlight. When I want to work secure I need to have some contact. How are you doing that?

Henry - It will take some getting used to. You don't "touch" the screen to navigate. You need to become comfortable with "hovering". In my case the heel of my hand does the "touching" you mention. I hold the pen very slightly above the screen/tablet surface so I can move the cursor where I need it. I position the rocker switch under my thumb. I think many people try to use their index finger on the rocker switch. That might seem natural but I found it easier to balance the pen and use the switches by turning the pen so my thumb does the button pressing.

I definitely takes some getting used to. I don't have the Intous set up right now, I've been using the WACOM DTU-2231 lately, it's the lesser brother to the Cintiq product.

Im on a Lenovo Yoga Pro2 with the i7. Im a Architectural Engineering student so I take a lot of Physics Based notes with a lot of pictures and charts so i need to draw in my notes. I also use Revit heavily for school and personal use. So im looking at buying the Wacom Intuos pen and tablet for 99$ now this setup only has 4 hot keys and no scroll unlike the Pro...If i can save 150$ and still replace a mouse with a pen that would be great. Any thoughts or suggestions would be great.

Well, I seldom used the scroll part of the Intous myself. I tended to use the scroll bar on screen with the pen. If you think you can live without some sort of scroll wheel experience then it sounds like you'd be okay. I just never found it convenient to change my focus, reach over and use the scroll "wheel".

It's a very personal thing though. Any chance you can get your hands on one to try, a return policy?