I posted THIS back in March of 2007. I was visiting an office recently and we were chatting about this issue and one of them said, "Oh I found a way to fix that situation!" I said, "I'm all ears!" (not literally...it's a figure of speech).

She said the key is to draw the boundary lines continuously, don't stop them at the top of a run and the beginning of the landing. In other words don't draw them from point to point along the sloping part of the sketch draw them from the bottom of the first riser up to the end of the landing and repeat for each side. 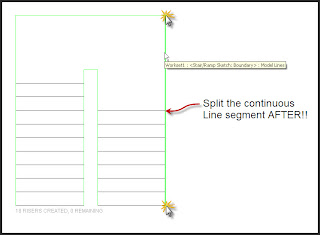 In the image above I show one of four sides that would need to be done this way. After you sketch in this way, use the Split Tool to split the boundaries into the required segments. The sketch will finish without complaint. Certainly easier than pasting into a stand-alone project file or building the stair in the stand-alone file.

This deserves to be in the Dept. of Strange but I don't want to start another whole department. I'll have to place an ad to get another reporter and Freddy has been so unreliable lately I just don't have the patience.

I ran into this problem a bunch when I was making 3-run stairs, since they had to be made of 2 separate stairs with an extra landing in the middle.

I noted this quirk and wrote more about my stairs here: http://thelowend.wordpress.com/2008/11/10/3-run-stairs/

Thanks for the comments and the link issue, I fixed it!