Don't freeze your AUGI Beer Bust mug, it may "bust" when you add your beverage to it!!

For those of you who attend Autodesk University each year or have at least once you are probably aware that AUGI has given away a beer mug at the end of the AUGI general meeting (Sponsors pay for these mugs so that AUGI and you don't have to, they are listed on the mug too). Attendees then go to the AUGI Beer Bust in the exhibition hall to wander around and see what vendors are offering and to, yep you guessed it, drink beer. 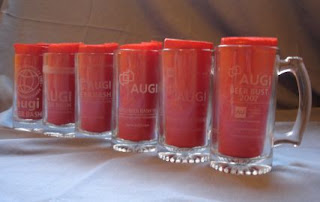 This past AU was no different. Well there were mugs again but they were not glass as they were in previous years. This year the the hotel/convention services people told Autodesk/AUGI that they would not be allowed to bring glass into the exhibit hall. The only option to provide a mug and access to the beer was something other than glass. Thus this year's offering was a clear acrylic mug with a liquid that claimed to be "freezable" so that a beverage could stay colder longer.

We've had a few reports so far that mugs have "shattered" and "cracked" when they were frozen and then used. If this has happened to you please respond to this thread at AUGI and "vote" on the appropriate response in the poll. We don't know what can or will be done about mugs that have "failed" to perform. When we do we'll let "you" know too.

For those of you with a sense of humor about this, one member opined that maybe the vendor took the "Beer Bust" labeling on the mug literally?

(Note: You must be a member to view the thread and vote in the poll however.)
Posted by Steve at 5:00 AM