The first thing I do when a project is open, to get a sense of things going on around me in the model, is to toggle on Worksharing Display - Owners (see image). That gives me a quick snapshot of who else is working on things around me. 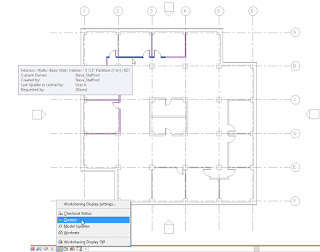 If I see a color on anything I thought I'd start working on then there is no point attempting to edit those, I'll just get a warning from Revit in response. The mere presence of colors indicate other people are around, in this context. Hovering over one element brings up a larger tool tip than the usual information we get, including which person is currently editing it.

I think most people forget about or overlook the Gray inactive worksets option too. That helps me cope with my nemesis Active Workset because it reminds me which workset is active because the things around me are either bold or not (see image). 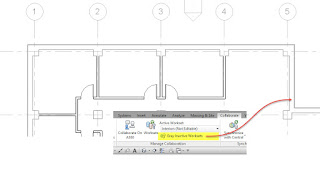 Prompted by a reply to a thread at RFO.
Posted by Steve at 10:00 AM

I've made a simple tool that tells me what workset an item is in and what workset I am in. If they are different then there is a button to switch to the current to that workset. Either way pressing Esc prompts for the next pick. My eyes and focus remain where they need to be, i.e. I don't have to find the properties window and scan for the item's worksheet and then remember that name while moving the focus somewhere else to select a change if that was needed, then find where I had been. It is good for checking element states prior to getting down to business. People say, "But you can simply change the worksheet down here.". Yes, but you have to already know what worksheet to select. Keep in mind worksets can be used for many more reasons than what you think they could be used for. Furthermore, who wants to wait the time for a popup tip? That is a ridiculous interface for this purpose without also employing a meta-key to have it popup right away.

Use it, don't use it, that's your call naturally. I like the features, find them useful.

Fwiw, I can find out what workset something belongs to with the regular tool tip that appears (on my PC) as fast as it would take to click on an element. It is the first thing shown in the tip, unless Design Options are in use, then that is listed first. You probably know that so I mention it for people reading that haven't noticed it yet.

Most people can't write their own custom tool. Many or even most users don't know about Worksharing Display options...and that's the point of my post really; awareness.