Kudos to GMcDowellJr at RevitForum.org for paying attention. I missed it entirely. We've been careful to warn people not to include math characters in their parameters names for so long that I just don't ever try to do it.

At some point in the recent past (my testing shows beginning with Revit 2014) Revit started reconciling the issue for us with these brackets [ ]. Just wrap your rogue parameter name using math characters with those brackets and Revit won't mind anymore.

Revit will even add them (the brackets) for us if we rename a parameter to include math symbol(s). For example, in the following image these parameters and the formula are fine.

Then I changed my parameter name and Revit put the brackets in the formula for me.

When I try this in Revit 2013 it doesn't mind changing a parameter name to include a math symbol if it didn't have one originally. If I try to create a new parameter with a math character and use it in a formula then I get the familiar warning. If I add the brackets myself, no difference. In 2014 and 2015 the brackets start working and get added to a formula for us, when necessary. 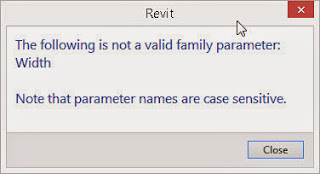 I don't recall The Factory ever taking credit for this change, a nice subtle compensation for parameter naming.

It is a nice change that makes it little bit "fool proof". Still the best practice is to NOT include the math symbol in my opinion.