Back in January of 2004, about eleven months before I started blogging and a couple months before moving to California, I shared a couple stage curtain families at AUGI. They were made using Revit 6.0. I recently got a message thanking me for them which made me curious how well they'd upgrade to Revit 2015. I downloaded them from AUGI too since I'd lost track of the files since then. They upgraded fine. Well, without a warning message but they didn't retain all their parametric behavior unfortunately.

If you're like me, you can't help but second guess the things you did when you get to take another look at something you did in the past. This is no different. I didn't like my choice of parameter names and the logic I used to allow for them to be reconfigured. So I spent some time re-working them in Revit 2015.

Here's what they look like in play now, the main setting is a burgundy color, the olio setting is a lighter shade and the cyclorama legs, borders and rear traveler are just black (though they look gray). If you aren't familiar with theater terminology, the olio setting is traditionally fancy or at least a different color. It is typically used (closed in front of the stage set) as the background for the opening act of a show, comedian, magician etc., far enough forward to leave most of the stage for the primary production (hidden from view), close behind the main curtain setting but leaving some stage space for the intro act. 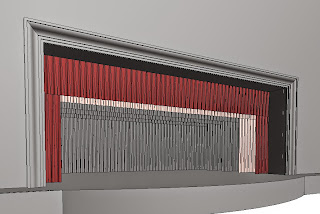 And in plan view 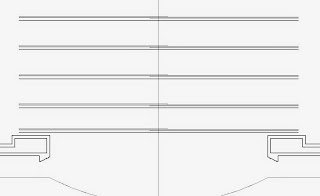 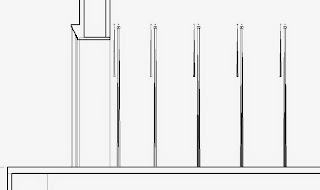 If you need them in an earlier version than 2015 these are the Revit 6.0 files. You'll probably have to tweak them a bit to retain their parametric relationships, such as changing the height of the curtain or length of the batten etc.

I'll close with a rendered view using some stage lighting fixtures that Andrew K shared at RevitForum.org (works with ARCAT) and a couple saxophones that Michael Anonuevo shared with me back when he was working on his family editor book. 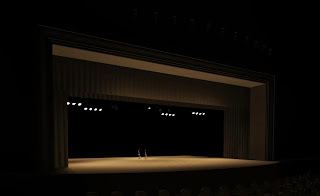 I did consider rebuilding these using the new Adaptive Point divide and repeat concept. Perhaps another day. It would be interesting to compare the performance of that technique against these. These do put a bit of a drag on a model because of the blend array that makes the curtain. 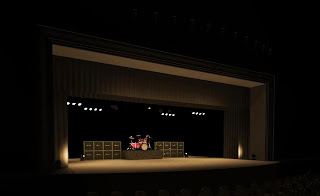 Just got a request from a user for this... 2 weeks ago I thought we wouldn't need something like that... Thanks!

Hi! I can't get these to show up in elevation. Can you help? Thanks for posting these. Helpful (if the will show in elevation as well as plan and 3D.)

Hi. I'm trying to download the curtain families, but the link is broken. Thanks,
Frank

Frank - sorry about that. I can fix that a little later today.

Hey Steve,
Any chance at re-posting these? I'd love to use them :)

I've fixed the links for the downloads, you should be able to get them now. Sorry about the delay.

WHAT DID YOU USE FOR THE THEATRICAL LIGHTING FIXTURES?
THANKS

Follow the link in the post for Andrew K's lighting fixtures posted at RFO, you'll need to join to download them...but joining isn't a bad thing either.