That Thick Boundary on my Sheet

A conversation about our title block is inevitable when working through implementation. If we're going to produce a drawing we'll need one unless we've arrived at the day when a model is the only deliverable which, unless I've become Rip van Winkle and woke up twenty odd years in the future, isn't the norm yet.

One recurring theme is a thick boundary line. A polyline is often used for this in AutoCAD. Sorry, there is no equivalent element (AutoCAD polyline) in Revit, namely that a polyline's thickness can vary along it length. To replicate a thick boundary we need to use Revit's own lines to sketch thick lines. We also need to keep in mind that Revit's lines do not square off at the ends, an option that AutoCAD developers added to it in the past. Revit's developers designed it thinking that the tip of pens/pencils are round and when you sketch with a them you get rounded edges, consistent with "reality".

If we need a thick (or very thick) boundary with squared edges then we accomplish that with a Filled Region (solid black). It is sketched like two rectangles, inside and outside edges of the thick line, using a thin line. When the filled region is finished it will look just like a thick "line". 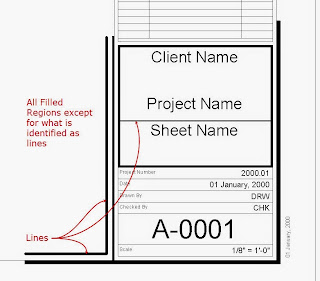 Nice tip, though I have been telling folks that part of Revit adoption is Revit adaptation. We get rounded off corners sometimes and that's just what we live with.

If you want very crisp boundaries, use invisible lines. This is often useful in detail components and scale bars.