When we assign a view to Mechanical, Electrical or Plumbing disciplines a Scope Box gets treated as an underlay element and its graphic display is also affected. This image is of a mechanical view and a scope box, only two sides of the box are visible (it's been like this since 2012 at least). Since it is regarded by Revit as an underlay element if I choose to disable the Select Underlay Elements option (new in 2014) I can't select the Scope Box either. 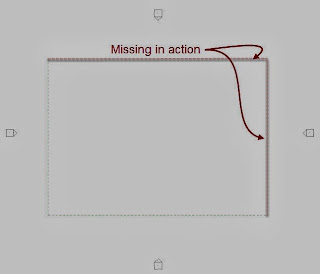 There isn't much we can do to counteract this graphic quirk except to deal with scope boxes in views where they aren't graphically harmed. Most of the time people want to hide scope boxes faster than a litter box when guest arrive. For offices that don't show a scope box in printed documentation it isn't an issue. If you really want to show it then it might be necessary to create an annotation symbol or detail component that you can use to compliment the Matchlines that are usually associated with scope boxes.

Keep in mind that each Scope Box has a Edit button for Views Visible (button is in the Properties Palette). 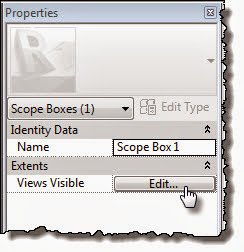 This dialog governs which views the scope box will be visible in or not. If you find you can't see a scope box in an elevation for example then double check these settings. You'll probably find that it is set to be invisible in the view. 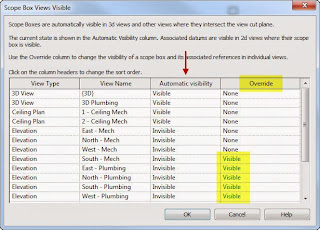 As mentioned in the first line of the dialog in the image, Scope Boxes are automatically visible in 3D views and in other views where they (the scope box) intersect the view's cut plane. This changes dynamically, if the scope box is altered so it comes into contact with a view's cut plane it will change from Invisible to Visible without any additional effort on our part. We can use the dialog to force either condition to be persistent however.