Stumbled across this while searching for something related to the history of Revit. This from a Technion press release dated June 24, 2007

A giant sculpture, weighing 4 tons, which depicts a book out of which emerge letters in various languages, was dedicated at the Technion last week, in the presence of the donor, Leonid Raiz, his wife Alexandra, the sculptor Boris Zaborov, architects Shaul Kenner and Michael Seltzer, and the heads of the Technion. 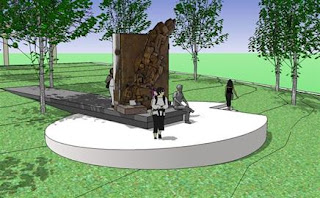 The bronze sculpture is 3.80 meters high, 2.60 meters long and half a meter wide. Platinum has been delicately mixed with the bronze, giving it additional color nuances. The architects created a concrete base that connects the sculpture with the ground. The base is made up of two elements – an elliptic element and one that look like a narrow, long shelf. The concrete shelf is 15 meters long. The elliptic base is 10 meters long. The shelf is solid concrete with white pigment while the ellipse has a gray pigment.

Email ThisBlogThis!Share to TwitterShare to FacebookShare to Pinterest
Labels: Off Topic

So what's the software company Leonid founded before co-founding Revit that is alluded to in the text? I thought they were just programmers for PTC.

I tried wikipedia and Leonid Raiz doesn't have an entry... someone needs to fix that!

Also, anyone want to hazard a try at pronouncing his name?

I suspect that the bio is a bit out of whack. The other software is probably meant to be Pro/Engineer and architecture is mentioned instead of manufacturing.

I've always heard his last name pronounced as "rise" (long i) as in the sun rise(s).