When Upgrading is a Downgrade

Dan Stine shared this dialog with me this morning. The wording it contains makes one think Revit is attempting to save in an older version, but that isn't possible. 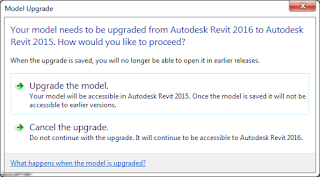 In this case he had Revit 2015 open already and inadvertently double clicked on a Revit 2016 project file. He eventually saw another dialog that confirmed the file could not be saved in an earlier format. He, like me, thought the dialog was mildly amusing and passed it my way.