AutoCAD has a feature called Base which allows us to specify an alternate insertion point that will be referenced (instead of the origin) when that file is inserted into another DWG file, either as an external reference or a block. Revit has a positioning option called Manual - Base Point. Sounds good except it doesn't work.

I created a DWG file (AutoCAD 2016) and sketched two squares, one at the actual origin and another one elsewhere. I used Base to reassign the insertion point to the bottom left corner of the other square, the one that isn't actually at the origin.

This is what I see when I use the Manual - Base Point option. 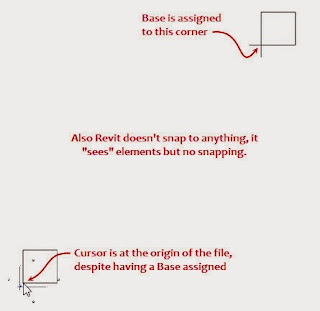 Same result for me.
You may dimension or align elements within linked DWGs, so you can get it where you want to be.
You'd kinda hope this setting would just work though!

Thanks for the report Steve - I logged this and assigned it to the appropriate team.

Cool, thanks for reading and acting on it!

I did a quick test and even if you change the UCS in the DWG it does not see it. It still uses the Origin of the WCS regardless.

Good news is that is what folks want most of the time... But it should still work right? :-)