Off topic...me visiting my past...

Last weekend I traveled to Atlanta to attend the second annual gathering of the self proclaimed "Southeast's Finest in the Music Industry". My old nemesis/mentor Fred (aka FUF) started it last year and I managed to get to this one. One of the things FUF was best known for was the gags he'd play on a group's last night of a tour. Witness his Uncle Sam costume for a 38 Special tour wrap up. 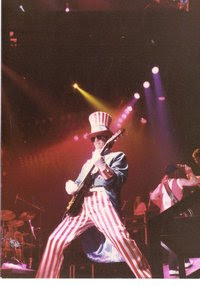 When Huey Lewis and the News wrapped up their stint with 38 Special in 1984 he came out dressed up as Big Bird tossing candy out during "Wanna New Drug". Later he and another trotted on stage in a two man horse costume during 38's "What if I'd Been the One" song which features some horses in the music video (if my memory is accurate). The second man brought a water bottle with him, and at one point lifted a leg...you can guess the rest. When Eddie Money toured with us he sat on the down stage edge dressed as Santa Claus, he and Eddie bantering... You never really knew what to expect from him. A true character and it was good to see him again after so many years! 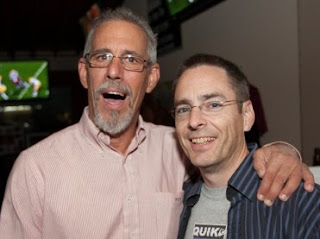 I've told people a number of times, over the years, that there is no proof that I toured with 38 Special in 1984 because the band's program "misspelled" my name from Stafford to Smith. I'm listed there but you'd have to be pretty special to figure that one out! The band/crew photo shoot at the end of the tour has me, but only a leg and an arm, the rest of me cropped out of view. Well at the reunion I got to see the program again for the first time in a long time (one is being sold on eBay for $40 right now)... imagine my surprise when I see a group photo in the back that I'm actually in! It's a grainy iPhone capture in a dim bar, sorry! 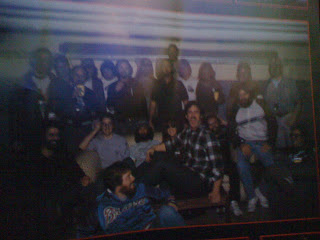 I'm the twenty something guy who looks like he managed to sneak in and sat on the couch when the photo got taken. Here's a few of the same folks now. Can you figure out which one is FUF? 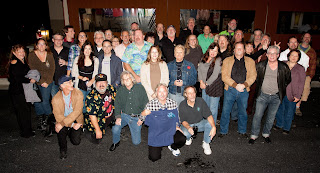 Last but not least a shot of the guy that got me started at R.A. Roth to begin with, Peter (aka Wookie, though a slightly grayer shorter haired version now). It was good to see him again, with a beau and ready as ever! Apparently we managed to elude the professional photographer wandering around (Michael) so it's another grainy iPhone shot...(behind us is the never aging John Delong, rigger extraordinaire) 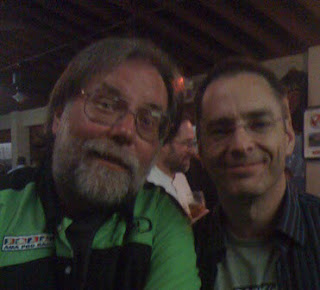 Email ThisBlogThis!Share to TwitterShare to FacebookShare to Pinterest
Labels: Dept. of Off Topic, Music, Roadie Stuff