Dept. of Off Topic - Kewpie Dolls

You might wonder what Mr. OpEd could have in common with Kewpie Dolls? In 1992-93ish I played drums for a three piece group by the same name. Formed by Jamie Treker and Mary Notarthomas, they hired a drummer to record an album with them. I think it was Tony Carbone, but not positive after so many years. After they finished the album they auditioned drummers to play live gigs with them. Yours truly was one of them and I got the gig. We rehearsed faithfully for about a year and played just two live performances during the whole time. A little disappointing.

My wife took some black and white photos at one point thinking we needed some band shots but I don't recall ever actually using them. Proof that I had a pony tail years ago! I showed these pictures to my daughter and it was amusing to tell her, "Yeah, the girl has the short hair and the guys have the long hair!". 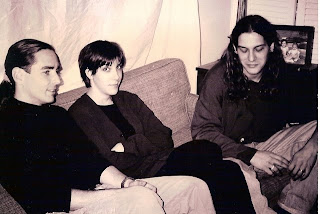 I enjoyed playing for them and the parts laid down for me to play were energetic and interesting. Shame it never turned into more gigs. The group kind of fizzled and we went our separate ways. Jamie is (was at the time too) a sports writer (soccer/futbol/football) and has garnered some notoriety over the years. 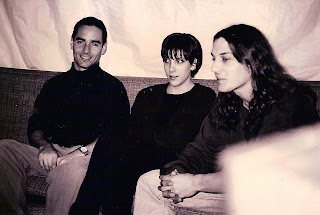 Search on the internet and ye shall find! I did and did... CD Universe actually has a copy or two of their CD still. 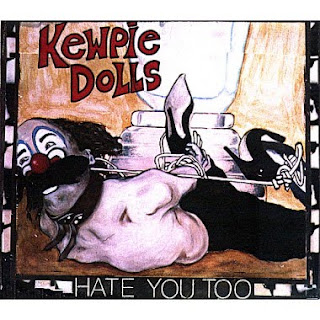 The trussed up clown might be a bit disturbing for some, sorry! All before my time so to speak. The album was done and getting pressed when I came on the scene. (if you can't tell, I'm not the clown but one of the clowns in the pictures above, I'm the one on the left in each)
Posted by Steve at 10:11 PM