I read a post at RFO that said the value for Fixture Units added up along a pipe run were correct at the pipe (in properties) but that tags attached to those pipes did not report a matching value. My first thought was that the system's Calculations parameter was assigned to something other than Flow. So I mocked up a quick test (using version 18.1.1.18 - 20170907_2315(x64) - 2018.1.1). Three families, two with the same Fixture Units assigned and one rogue.

I changed the middle fixture to be the same as the outer two and the pipe properties responded, the tag didn't (2nd from left). I took a look at the Calculations parameter for the Sanitary Piping System. This is using a stock Imperial Plumbing template. It's already set to Flow. 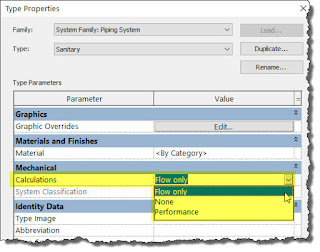 I switched it to None, clicked Apply, and the tags responded with this (Performance does the same).

I changed it back to Flow, clicked Apply, and the tags responded again but now they report the correct values.

I thought that there might have been a subtle change within the Mechanical and/or Piping settings that I missed when Revit 2018 arrived. I don't think there is though.

If you're counting on Fixture Units being added up and reported correctly in tags, you'll need to keep an eye on this. I've been able to wake up the tags by toggling between Calculation Settings for the Pipe System.

Added: Temporarily adding a pipe or altering the connected pipes also cause the tags to wake up. Also, just to make things stranger, changing the fixtures again I find the information displayed in properties of the pipe does not respond either, nor does a schedule of Pipes. However, if I have a Piping Systems schedule that does update as changes to fixtures are made.

'Sanity Piping System'! Can I have one, please?

Whatever do you mean? ;)