Relocate Project is Sleight of Hand

Try these steps:
In a sense Revit just shifted the world over, underneath our building, and the origin never really changed. If we try the steps above and make sure we can see elevation symbols it becomes more apparent when they don't change their relationship to the PBP after using Relocate Project.

The PBP and SP start out at the same location in stock templates, but they are NOT marking the same information.

The Project Base Point always (when clipped) identifies where the project's origin is. The Survey Point identifies one alternate coordinate system's origin location, when it reports 0,0.

I believe it causes confusion when we examine the PBP coordinate values (when selected) because it displays values that are relative to where the SP defines the WCS origin, NOT the project origin. Since the project origin is never really changing it would be more accurate or consistent to continue displaying 0,0 and only begin showing different coordinates when it is moved un-clipped.

The following image shows a SP that has been moved by Acquire Coordinates to mark the WCS origin of a source survey DWG. The PBP now shows coordinates that match the offset from this alternate coordinate system's origin. To be fair it does say Shared Site: just above the values but it isn't as meaningful to most users as we'd hope. 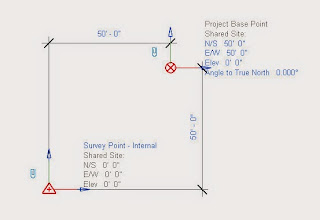 The following image shows both PBP and SP moved while un-clipped. It is tempting to think of them as points when they are moved like this but they are really annotation referencing coordinates that are only meaningful when compared with where the origins they are referencing are, which I believe contributes to the confusion about what they display when selected. 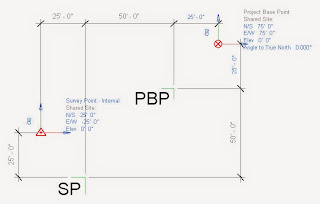 I know this is an old post but, I've always thought the opposite of what you said in your 'advice' section regarding the 'do not move project base point clipped'. I was hoping you could explain that a bit more, if possible. Always have trouble wrapping my head around this topic.

We can't do anything productive by moving it clipped. The only useful purpose they provided for the PBP is based on it not being clipped. We can position a linked file by PBP to PBP now and Spot Coordinates can set to reference the location of PBP versus the SP.

If you think there is something useful that can be done while moving a clipped PBP...what might that be?