I received an email the other day asking for my opinion about modelling soffit conditions. In this particular case they used a thick wall to wrap a steel beam but then worried about the results when using clash detection later between the wall and beam. Since they overlap one another it would be a clash. Determining what constitutes a valid clash when modelling and who is modelling and then doing the clash detection is a deserving topic on its own.

My response is that I prefer to "model it like we build it" as much as is reasonable or possible. In this case I'd take this approach. I'd model the ceilings, one type on either side of the beam and another for under the beam (assuming "hat" channels for structure). I'd use a separate wall type (also assuming "hat" channels for structure) for the soffit "wall" so I could adjust where the gypsum wall board started and stopped. 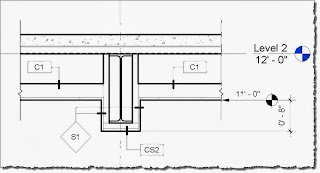 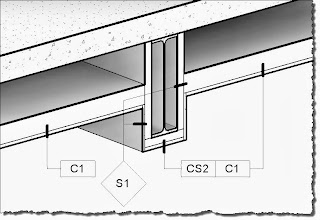 In early design I could probably just get away with creating the ceilings and add the walls later when sections were needed.

Did you create two wall types, one below the ceiling, and one above? One looks to be gyp. wrapped and the other above the ceiling doesn't.

Not two wall types, just one. Layer is unlocked so the stud can extend separately from finish.

Thanks for this helpful article. I'm running into a couple of issues. No matter what I try, the finishes of the vertical wall and the soffit ceiling won't join cleanly. In example 1 the wall sits on top of the ceiling, which prevents the two GWB layers from meeting, and in example 2 the ceiling stops at the face of stud, allowing the vertical GWB to come down to the soffit height, but creates a double line at that edge in plan view.