Here's what my intro slide looks like for my session later today at Autodesk University 2012, it's called "Sharing Work with Worksharing Using Autodesk Revit". 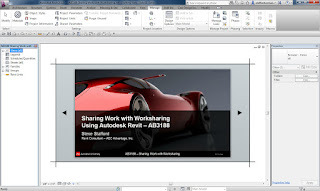 It's just the sort of Power Point that this Revit guy likes!
Posted by Steve at 6:00 AM

That is pretty awesome! It definitely helps if your computer doesn't have PowerPoint. I have to forward this to my co-workers.

Steve,
Very innovative! Autodesk would call that "unintended use of software". Some of us Revit old-timers call that a "Phil Read".