Stairs in the Wild

Revit stairs and railings are long overdue for some serious development time and effort. It's underway if you can read the stars. I was recently in Sydney to attend the Revit Technology Conference 2010. Phil Read attended as well and we both shared the same plane back to Los Angeles. On our way to the Air New Zealand lounge (as Phil's guest) we stopped to admire this stair. The glazing railing is not attainable with the current railing feature set. It's off to in-place modeling. I'll leave it to Phil to get around to discussing how he'd tackle this one on his own blog in his own time if he chooses. 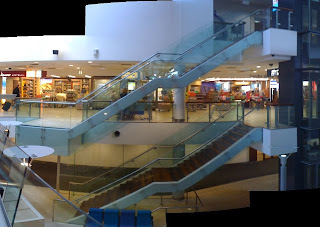 This next one is at the current hotel in Kuwait City. The Crowne Plaza has been restored to its former glory after the damage it suffered during the Iraq invasion. This stair was present then but it is in much better shape. Again the railing features a bottom edge detail that the current features don't support (okay...without fussing a bit).