When you work with Structural columns you have the option to define them according to their Height or Depth relative to the level you are working on. This is in response to the fact that Revit used to only place them according to Depth and that was frustrating for most users. Having the choice is good!

When you want to propagate a Level's columns to another Level or Levels by using the Copy to Clipboard followed by a Paste Aligned - Select Levels by Name technique...you don't get a choice. Revit's code places the new columns using Depth regardless of the fact that you placed the originals using Height.

If you aren't careful you'll likely end up with a warning like this one.

Now the programmer will take issue with the "bug" designation because it works as written. True or not...it doesn't work the way I'd expect it to work.

The solution? When you use Paste Aligned, remember that the Level you are pasting from and the one above it should not be selected because the next set of columns above will be starting at a level and using a Depth placement logic instead of Height. Here's an image of the Paste Aligned Result when I select Level 3 for destination even though I selected the columns on Level 1 as the originals.

It is interesting that skipping Level 2 in the selection process produces a column whose Instance parameters end up "correct" though. 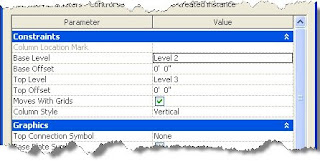 Unfortunately this image is from 2010 and that means it isn't "fixed" yet...and yes this is an "oldy" but not "goody".

I always thought Revit structure elements were designed and based on how a structural engineer "looks" at columns, from the top down, hence the depth feature and the reason why the Paste to Level works. I could be wrong though.