I was reading recently (in a couple forums) about a problem with background processing and views using Color Fills. Autodesk acknowledged the issue and they've just issued an update for called Revit 2016 R2 Update 1, and there is an Update Release 11 available now for Revit 2015.

In the release notes they reference color fills when closing a document that uses them. That doesn't sound like the issue I read about specifically. Those seemed related to printing views that have a color fill applied but maybe that's a minor difference from the code's perspective. Hopefully this update does resolve the issue they were having. It did seem that users could avoid it (the background processing error) if they were careful to save their project, close Revit and restart it before attempting to print those views.

If you have Autodesk Application Manager installed, and if you'd like to see if it will let you acquire the updates, you can try a right-click on the icon in the system tray and choose Check Now. 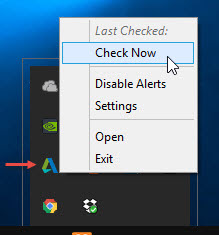 I've installed it for one team that was having the problem a lot.
They issued CDs today and printed without any problems (well, that problem at least).
Although this is one of those issues when you don't really know if it's fixed, or if it just didn't happen today.
So far, so good, though.

We found it solved the color fill not regenerating issue. However we also can't install it in most machines because we "baked" in R2 in the image and those that got it through this image refuse to update. Working with Support to find a solution but I fear it's gonna be the same as last year where we had to uninstall and start from scratch on all machines :/