It is quite common to find the orientation of families confusing, both when we make them and when we attempt to place them in a project. What we consider front, back, left and right doesn't seem to follow consistent logic. Okay, there is some consistency it just seems opposite of what we might expect. What do most of us expect? Speaking for myself at least; Front is the bottom of a plan view, Back is the top of a plan view, Right and Left are the right and left sides of the plan view.

If we examine every family and family template in the stock content we'll find that Front IS at the bottom of every plan view in all of them. The View Cube also matches that convention. The thing that confuses us is that a portion of the stock content has been modelled in the reverse. That which we think of being the front of the object being modelled is the back. Even in those families however, upon closer inspection, we will find that the reference planes are oriented correctly (if they are named at all), the geometry orientation is wrong. The direction the geometry is facing is wrong.

If we consider a chair family most if not all of them are modelled with their front toward the top of the view (which is Back). If we compare that with a desk we'll find that it is modelled with the drawers (can we agree that they'd be the front?) toward the top of the view. These two families oriented this way don't allow the user to place a desk, horizontally for example, and then a chair horizontally so that they are oriented correctly with respect to one another. In the case of this desk there is no visible clue to know which way the desk is facing during placement. We'd be rich if we got a dollar every time we noticed the desk was backward when we open an elevation view later. 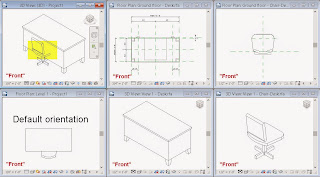 Looking at the View Cube the chair looks wrong, but only if we happen to agree the front of the chair is the side our legs are on. In the context of being placed next to a table or desk it means that the chair is facing the wrong side of the desk or vice versa. They had to pick an orientation but in the case of a desk that has drawers they picked wrong. Other work surfaces and tables might not matter nearly as much. It would make more sense to me if the desk were modelled with the drawers facing front, the bottom of the plan view. This would allow us to place a desk and chair and their orientation would make sense regarding each other.

Another apparent mismatch of orientation logic is base cabinet and wall/upper cabinet casework. Base cabinets are modelled with front facing the bottom of the plan view but the wall hosted upper cabinets are facing the back, the top of the plan view, opposite of base cabinets. Placing them in a project however defies the apparent orientation mismatch because the origin of the base cabinet is at the back and it is for the upper cabinet too. This means they orient logically when used together despite being modelled facing different directions in the family editor. 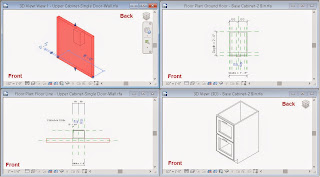 Also contributing to confusion is that the original content for doors and windows all assume that their Exterior side (and Placement Side) is what Revit considers the back side of the family. I've always thought of the exterior side as the Front of a door or window, the side that faces people as they approach the house. A door was the very first family I made with Revit. Afterward I believed that Front was the top of a plan view in the family editor. At least until I encountered enough other families to realize I was wrong. 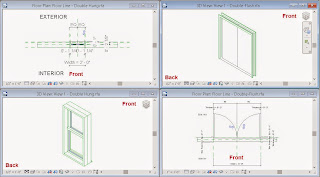 To appear more consistent, while working in the Family Editor, Autodesk would need to revise most if not all of their hosted content (and others) so that the geometry orientation respects the bottom of a view being the Front view. The placement logic it uses must compensate for the placement side orientation of the geometry not being consistent with the notion of Front. If they revised the orientation of content to please Family Editors then they'd have to be careful to also revise the placement side logic.
Posted by Steve at 8:00 AM

A classic case of a seemingly insignificant decision made early on in your life coming back to haunt you for the rest of your years :-) Thanks once again Steve for your clarity and persistence :-)

Good work to dedicate a post to that issue.
I had the impression Autodesk are just running with their 'blooper'now as changing all the content would be too much work (not just for Autodesk but for everyone else who decided to follow their lead).
However, as I decided early on to run with the view cube as the one consistent element in all Revit families, the little icons that you see in the 'place component' list now show the back of all families...

Even in terms of consistency:
Assuming that front is at the top of the screen then left and right plane would need to be reversed, if you like to look at things from the front.
But obviously someone at Autodesk prefers the rear views of all aspects of the world just like Caspar David Friedrich.

I ALWAYS THOUGHT THAT THERE'S SOMETHING WRONG IN FAMILY ORIENTATION. THANK YOU STEVE

Steve
I once worked on a complicated German Project. European projection is "backwards" to what we in USA are used to (top of page was bottom of object and bottom of page was top of object) ... If you are seeing this in mainly European content, that could explain it.

To add to the confusion, it would seem that the 3d preview in the Properties dialogue in a project displays the family from the Top,Back,Left view of the family environment, and the front view of a legend component actually corresponds to the back view in the family and vice versa...

This may in fact imply that up is front and down is back?