When you try to import AutoCAD data you might have seen this series of messages before? First we get a complaint about Elements lost during import. 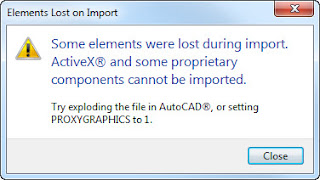 If it is a Civil3D file that might not be too surprising if they created AEC elements like contours or road elements. Then we get this message.

It's especially confusing if you just were looking at the file in AutoCAD and know there are elements there. Worse you'll probably see the first dialog again if there isn't any data in Paper Space to import either. Even worse is when you find out it is all "your" fault. Well at least in this case it was my fault.

The culprit is saving the DWG file and then attempting to import that DWG file, which happens to be using a newer format than the version of Revit that is being used. In my case it was a AutoCAD 2013 file that I was attempting to open in Revit Architecture 2012. I keep forgetting to save it using the 2010 format. Once the file is saved in a compatible format Revit works much better. Too bad the messages don't give you any clue it is a version thing.

So if you see such messages remember it might just be the file format/version.
Posted by Steve at 10:57 PM

If you would stop working so late into the night/early morning and got some sleep your "fault" meter would reset :)