My Revit and BIM Blog Lists

A brief post in the midst of a holiday hiatus from blogging. I started a couple lists of blogs years ago, Revit Focused and BIM and Misc. Originally they were all on the right side bar of the site. That got tedious fast so I moved them over to their own pages when Blogger added the feature. Slowly since then I've added to it as I became aware of others. Between the two lists there are well over two hundred to chose from. A few months ago I added a "Must Follow" label to some. That generally means they are part of my own reading list.

For what it's worth, I'm not selective or exclusive about which blogs are on the list. I only have one criteria, that I know they exist. How could I put them on the list if I didn't?. Some blogs on the list have just one or two posts total. That just shows it's easy to start a blog, harder to keep at it. I leave the blogs that are hibernating on the list because you never know if the few posts that are there will be helpful to a reader.

If you are looking for your blog on the lists you need to be aware that there are two lists. 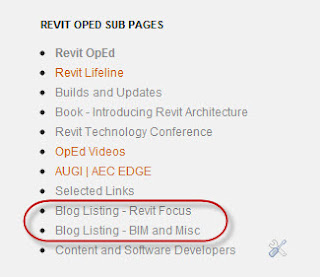 When I picked which list to place a link to a blog I tried to decide how "Revit" biased/focused they were/are. If the blog was distinctly Revit...it ended up on the Revit list. If the blog ventured off on other software or included the BIM acronym in the blog title then I picked the other list. In some cases blogs have changed their name or focus since I first saw them or the people that write/wrote them have changed employers/careers. I don't get as much time to revisit the lists to check URL's or names as I'd like.

If you write a blog and read this one it is very likely yours in on one of the two lists already. If it isn't, just let me know.
Posted by Steve at 12:51 PM

Email ThisBlogThis!Share to TwitterShare to FacebookShare to Pinterest
Labels: blogging, Dept. of Off Topic

Makes a person wonder (or at least me) how many people out there regularly write, blog or post about BIM and Revit. I'm willing to bet that there are probably less than 200 of us that spread the "gospel" in multiple forums and blogs. Nice to see your list and some names I haven't thought about in ages. A quick click and now reconnected!
Thanks Steve.

Really nice and definitely it will be useful for BIM User's. Kindly keep update like this.