In the debate about should we or shouldn't we use Revit (or 3D etc.) people overlook the intangible stuff that is hard to quantify until you encounter it, the title of the post. I'm writing about that "thing" that happens when you create a 3D model of something you "understand". I'm not trying to be insulting because I know that I've created models of things that I thought I understood and then found I didn't fully appreciate the impact it had on other related items later on.

Once upon a time I worked for a theatrical contractor that specializes in stage curtains, rigging and lighting systems. One of the things I did back then was shop drawing for our projects. We were careful to show how our equipment interacted with the building. Yes...these were drawing done by hand on vellum/mylar and with technical pens/pencils. We eventually used AutoCAD too.

All too often a site visit would find sprinklers and their pipes suspended from "our" rigging steel, ducts in the path of travel of curtains and lighting, drains and other sundry items in the way of our other equipment. Not that we didn't try to coordinate this stuff. Things like this need some room! 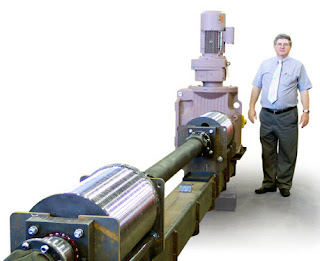 Usually when I'd talk to a contractor the story was, "Never saw those shop drawings, wish we had! Well, our stuffs in, work around it!!".

This is where I'd get to be "theatrical" and be a "Prima don". In a job trailer full of angry contractors who have just been told that much of their work would need to be redone I calmly explained that the reason the building is getting built is so that the equipment we are supposed to install actually works. If "our" stuff doesn't work then we can save the client a lot of money and stop building the building, won't need it after all. 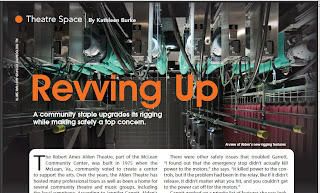 As you can see in the image above there isn't a lot of real estate available to just put stuff any old place you want in a stage area. Once supplied with the "bigger" picture, sighs all around and a few "who's going to pay for this?" and they worked it out so we could do it right the second time. This happened more than a couple times over eleven years unfortunately.

Fast forward to Revit and modeling buildings...if our submittal was 3D and their submittal was 3D and everyone's was...we could evaluate this coordination much more efficiently than sitting in a job trailer and arguing about who was right. The sad truth is that too often the 2D drawings in the field don't get in the right hands at the right time. There are great projects and teams and then there are others...it takes all kinds.

Serendipity is when you realize that you didn't fully understand something. It comes when a collection of models means a dozen players solve a problem in an hour instead of spending several hours just trying figure out if there IS a problem. Consider that this usually meant flipping sheets and asking questions like, "What's the bottom elevation of the beam again?" "What's the duct size again?" "It says Top of Steel is 28'-0" but the finish floor is "27'-8", what gives?"

There are so many good reasons to do it...even some you haven't considered...yet. Climb down from the "fence"...

Credit is due for the images above:

The first image above is a custom winch assembly to lift a 22,000 lb. media screen at the Newseum in Washington, DC. The winch couldn't be mounted above so it "self-climbs" and had to be built to lift 34,000 lbs instead, its own weight plus the screen. An aside, I dealt with the sale of a similar winch and did the shop drawings for a project in Seoul when I worked for JR Clancy. The winch had to lift a prop, a small car, very very very fast so that it could arrive in the scene during a change and then disappear during a subsequent change. Oh and that's Rod Kaiser, an all around good guy. There is little he hasn't seen or done in his many years with JR Clancy.

The second image above is a capture from a magazine article featuring the Alden Theater in Maclean, Virginia. The magazine is Stage Directions. The article was written by Kathleen Burke and is called Revving Up. The theater contractor/consulting firm, Pook Diemont & Ohl was hired by the awarded contractor/consulting firm Barbizon Capitol. They used the equipment manufactured by my past employer JR Clancy.