Steve Shell the "Rock-n-Roll" Architect, famous for not only his membership at AUGI but his rock-n-rolling ways as a guitar player in Shell Shock has decided to donate some of his "locks" to a deserving fellow Reviteer, Jim Balding (at right). Jim, who says he "lives up to his name" Balding was attending Autodesk University last year when Steve (at left) suggested that he could help with his "problem". 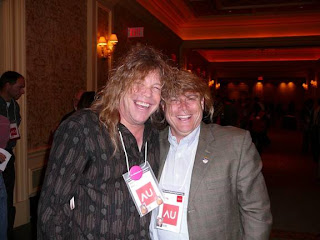 A schedule for the transplant has yet to be defined but Jim was quoted as saying he already plans to learn how to play the bass and join a band as soon as possible.

About the Author, Freddy Latherdon:
Revit OpEd's ace reporter, Freddy recently moved to Wapakoneta, Ohio to get away from the LA party scene. Brittany, Lindsay and the "others" were just too "out there" and he needed a break. He has a one bedroom studio apartment now that he shares with his three "Lavender" Retrievers, don't even try to tell him they are Labrador Retrievers...he'll get mad and punch you. The judge gave him one more chance to deal with his anger issues or he'll do some real time. Might account for why he's been so quiet as this is his first story in quite some time.

Email ThisBlogThis!Share to TwitterShare to FacebookShare to Pinterest
Labels: Fiction

Yay!!! Freddy is back...he was an early presence on this blog...nice to see him surface again.