I left Los Angeles on October 23rd, Monday night, at 10:30 PM and arrived in Sydney on Wednesday morning at 6:00 AM. I lost one whole day in the process due to the magic of time zones. Much to my surprise I was quite refreshed after my 14.5 hour flight on a Qantas 747/400. The Qantas flight crews were the picture of efficiency right down the instructions to “do up” our seatbelts. I love the way folks outside the USA say things!

The event organizer was and is Wesley Benn, the owner, proprietor, chief cook and bottle washer for Benn Design. Here’s a shot of Wesley. 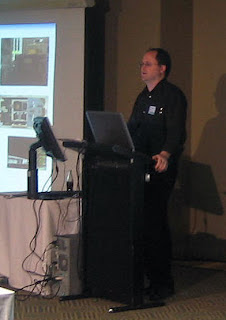 Wesley was kind enough to rise early enough to give me a lift from the airport and take a little driving tour of Sydney which included walking around the Sydney Opera House. It was unfortunate that I couldn’t get inside. I also realized that I didn’t bring a camera AGAIN! I seem to lack the gene that causes people to photograph things that happen in their life. If it weren’t for other families who do have this gene there would be no record of our children doing anything!

We visited his old office where he “made” me help him move a copier, remove some paint cans and do a little demolition on his signage. We then went to his new office where he again put me to work packing up computers for the labs, teach a couple clients Revit and well…not that last part. Car packed full of stuff we headed for the conference site, but for the brief stop to put some helium in one of his tyres. I had no idea that it is fairly common practice to put helium in tyres instead of air. It is apparently a very stable gas to use and much more reliable than air. (notice my Austrylian spelling of tires?)

The venue was the Shoal Bay Resort and Spa, which is located on the white sands of Shoal Bay in Port Stephens, New South Wales, Australia. You can review the conference schedule and the speaker biographies.

When I first started discussing attending this conference with Wesley we thought it would make sense to teach a class. One class became two, the first a family lecture and the second a mini session on massing. Since I was preparing a lecture for Autodesk University 2006 on the subject of Families anyway it made sense to preview or test or demo it on a smaller crowd very very far away right? Good thing too, because my ninety minute session ran forty five minutes over…with permission mind you…I gave them a chance to “run away”. Good thing we were only going to dinner and open bar afterward. Here’s a shot of me doing what I do best…blah blah blah…. And my power point humor 8-) 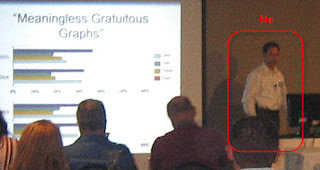 As conferences go it was very busy, yet very relaxed and a lot of fun with as much effort applied to making time for mingling. I did learn that even though Foster’s is "Austrylian" for beeear, Victoria Bitter and Tooey’s gets poured a LOT more!

One of the highlights of the conference for me was getting to finally meet my friend Bruce Gow in person, who is probably more widely known by his AUGI Revit forum moniker “BeeGee”. We’ve been friends from afar ever since getting to know each other via the internet and the old Zoogdesign Revit forum. It was nice get to sit and talk face to face!! Here’s a couple pictures of Bruce, one where he’s inspecting the inside of his eyelids or maybe he’s just blinking?? You decide… 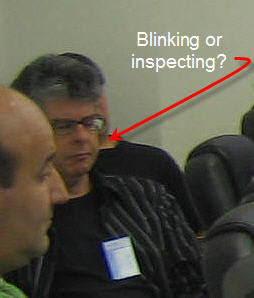 Apparently after this first picture he figured out how to always stay with his back to the camera? 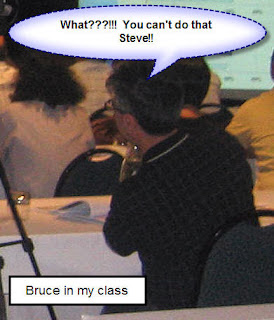 Here’s a parting shot of the conference attendees! Try to put aside a week and travel down under next time!!

It would be unfair to exclude the contributions of Marina Radosevic and Helen Benn for their tireless effort to organize everything. Also deserving of recognition for their hard work is the remaining leadership of the Revit Users Group Sydney. They are (Treasurer) Michael Juda, (Secretary) Adrian Esdaile, Rocco Raso and Toby Maple.

Okay one more…just what every Revit party needs! A circus performer trying to set himself on fire! 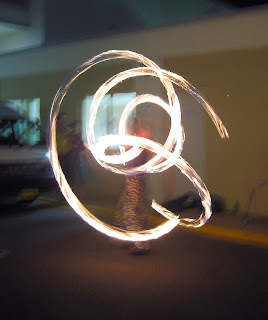 That photo of me was definately not taken during your lecture, Steve. 8>)