Mr. Revit OpEd at The Whiskey a Go Go

This provides ample distraction from writing as much as I used to. I can hit ALL the THINGS!! 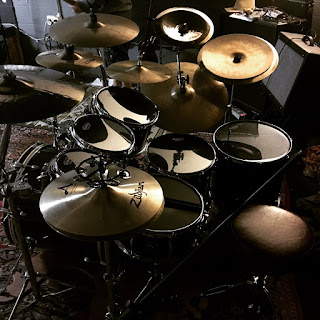 Yes, I've been earnestly playing the drums again. When I moved to California the three piece band (Angry Neighbors) I had been part of for roughly ten years found themselves without a drummer. They've kept themselves busy since, most recently as part of a group they call Harmonic Dirt.

For many years steady travel for work made it impractical for me to be part of a band here. I haven't needed to travel nearly as much for the last couple of years and I realized I could make it work. So far so good.

Last May I joined a band called Parker Street Gypsies. It is led by and features songs written by Michelle Kasajian (vocals/guitar). Armando "Mondo" Lopez (guitar/vocals) contributes songs as well. Add in Charlie Peck (bass guitar) and yours truly to provide the foundation and we make four. We've been rehearsing regularly working toward playing in front of people more often. Our first time out was at the O.C. County Fair.

Our next gig is THIS Saturday, December 2nd at The Whiskey a Go Go. 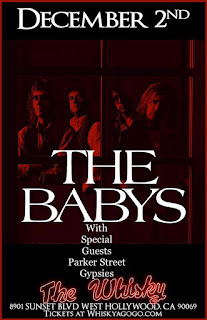 We open for The Baby's, a favorite 70's band of mine (and many others)!! I'm looking forward to seeing and hearing them as well hoping to meet their drummer Tony Brock. His playing was/is a strong influence on my own approach to the drums. I think my favorite album is Union Jacks but I tend to waffle on favorite anything.

Believe it or not, there are FIVE bands leading up to The Baby's performance Saturday night; they are: Parker Street Gypsies (us), Alinea, Nation of Salvation, Union of Saints, and Kirk Randall & the Back Beat. We play last but just before The Baby's set.

Despite what you may read or hear live music is still out there waiting for you to experience/enjoy. Musicians are still struggling, as ever, to satisfy their muse and play for you/us, no matter how much the business has changed.

If you are in the LA area and looking for something to do on Saturday night we'd love to have your support. The Whiskey is an all-ages club, as well as being a famous venue for music historically.

We love to rock!

P.S. At the recent Autodesk University several of us musician types got together one evening after the primary events had wrapped up. We played some tunes at a local rental studio, some were planned in advance and many others weren't. Some turned out pretty well and others...well it was fun to play... 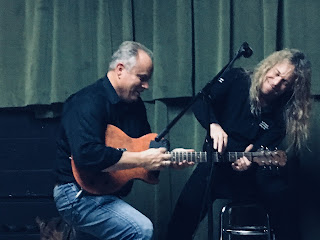 We didn't have a cowbell so JB made do with a Four Roses whiskey bottle that somebody conveniently emptied so it could be used. This was my second year playing with them, good fun!
Posted by Steve at 12:24 PM

Awesome! Way to go, Steve. I have a passion for music too and that's what I do outside of the "BIM world". I play in two bands (guitar in one and bass in the other). If I were in the area I'd definitely check you guys playing. Or maybe check the AU Band next year! Keep rocking!

Cool thanks! Saw you at AU from afar among the throng btw. Gone before I could say hi...as happens there.