Three subtle improvements were made in the Revit 2008 line that I'd like to point out on the off chance you haven't noticed them.

First is the repositioning and naming of the Right Click menu item Properties. It is not called Element Properties and positioned at the bottom of the Right Click menu, right next to View Properties. Every class I've ever taught had a least one user click View Properties instead of Properties even if I warned them first. I joke that "View" isn't a verb, as in, "yeah, I want to view the properties!". Now that it is repositioned I'm sure it will confound "old timers" for awhile but I think it is for the better or at least clearer what they are for. Here's a screen capture.

Next up is the Design Bar More Tools >> feature that permits you to access the tools that have been buried beneath other tabs when your PC/Notebook display resolution "runs" out of space to show them all. This button presents a small flyout that contains the hidden tools so you can still get to them without resorting to using the modelling menu "all the way" at the top of the interface. I always imagined a scroll bar to resolve this but this works too. Here's a screen capture. 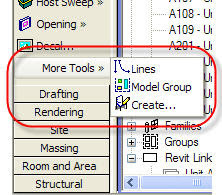 Last is the additional feedback offered on the Status Bar as various operations take place. Reloading a link, saving to central, opening a file and other lengthy processes will display a progress bar and information to the left of the bar so it is clearer what is happening. You'll have to pay close attention to catch it though. I tried a few different things to catch a screen image of the feature and I couldn't time it just right so you'll have to just watch for it next time!