I've been working with a bit more than 200 point cloud files lately. That means I've been negotiating with the Manage Links dialog a fair bit. It's fun...

First of all, there is no way to import multiple point cloud files once. I've already mentioned previously that Revit shifts the first point cloud import (index to .pcg format) so that the overall z,y,z extents are centered at the origin of the project file. This means you need to carefully sort that out before you go nuts modelling.

Next, the Manage Links dialog doesn't sort the files alpha/numerically, it keeps them in the order that you import them. That might be nice if I were concerned about "when" I imported something. This before that I suppose? Practically speaking it's a pain in the bottom to "find" a scan later. In the video I show five. Imagine scrolling a bit.

Which brings me to re-sizing the dialog. They've been diligently fixing these over the last few releases. The Manage Links dialog does re-size (stretch/contract) and all the tabs information within does too, except...you guessed it...the Point Clouds data frame. This just adds insult to injury when I'm hunting for a scan and they aren't "in order"...and the frame I'm hunting in is a fixed size. 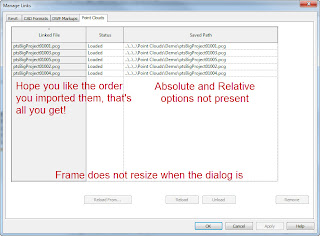 I find that making sure I've got something is easier in the Visibility/Graphics dialog instead.

That's stretchy and the order is sorted!! Oh, Mr. application specialist or product designer, please don't take that as an opportunity to leave the Manage Dialog the way it is...PLEASE!

Last item of frustration...for now, the file location of a point cloud doesn't have the option for absolute OR relative. It's just absolute. So pass a file along to someone else and they've got to fix the path of every point cloud file. It was so much fun to do the first time, I've got to SHARE!!

Okay you know I'm frustrated if I bother to MAKE a VIDEO too right?


Yes, it occurs to me that they didn't expect me to load 200+ .pcg files into a project file. If you are working with a few files, no big deal. If Revit let me load and position the files reliably/repeatably I would have been willing to work with a smaller data set and load/unload as I needed things. As such, once I got a point cloud in place I was really reticent to risk it getting out of whack again.

From a performance standpoint Revit is rather ambivalent about it all surprisingly. Each scan (.pcg) file was created from a FARO .fls file that contained between 25-50 million points (ish) and weighed in at about 1 MB each. The .pcg files ended up about twice as large as the original .fls files (roughly). Fwiw, I did assemble them into a separate project file and linked it to help resolve the positioning issues I had. Also to keep them out of the main project file.

So if you are one of the few that noticed my tweet ten days ago about my personal outlook being cloudy, now you know.